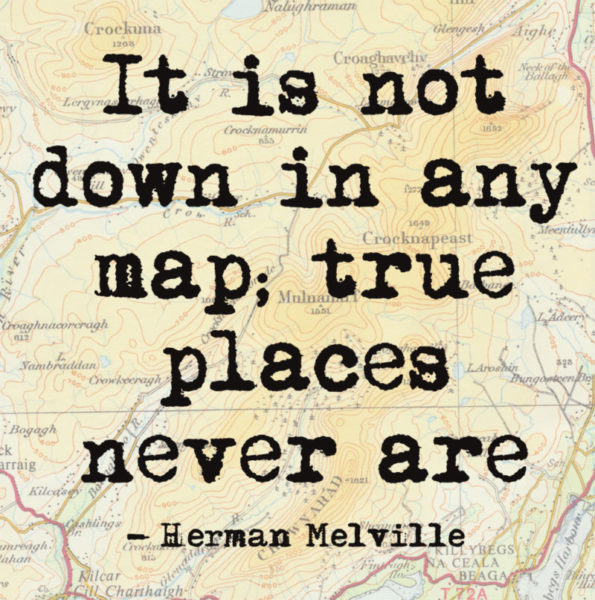 Posted at 11:40h in Quotes by Vanessa Scott Hayward

“It is not down in any map;

A quote from Moby Dick the novel by Herman Melville

Definitely my favourite quote from the book, it always brings to mind great open seas and a horizon of possibilities beyond.

When Moby Dick was first published in 1851 it was not a best seller. In fact it wasn’t until long after its authors death that it rose to the heights of literary glory that it now resides in.

It also, in its first English edition, had another name, The Whale. Less than a month later, the American edition, was published under the title of Moby-Dick. Almost as significantly, the US edition contained an “Epilogue”, which explains Ishmael’s miraculous survival and, thus, how the story of the great white whale came to be told. The explanation for this is simple, Melville secured his American publishing deal long after the English one and in that time the book had evolved.

When he died, in 1891, Melville was virtually forgotten. Today, Moby-Dick is, in the words of the Oxford Companion to English Literature, “the closest approach the United States has had to a national prose epic”. A sad and yet familiar tale of many greats of the artistic world, whatever their medium be.

Interestingly In the Heart of the Sea a film to be released in 2015 is based on the real life maritime disaster that inspired Melville’s novel. Life imitating art, imitating life.