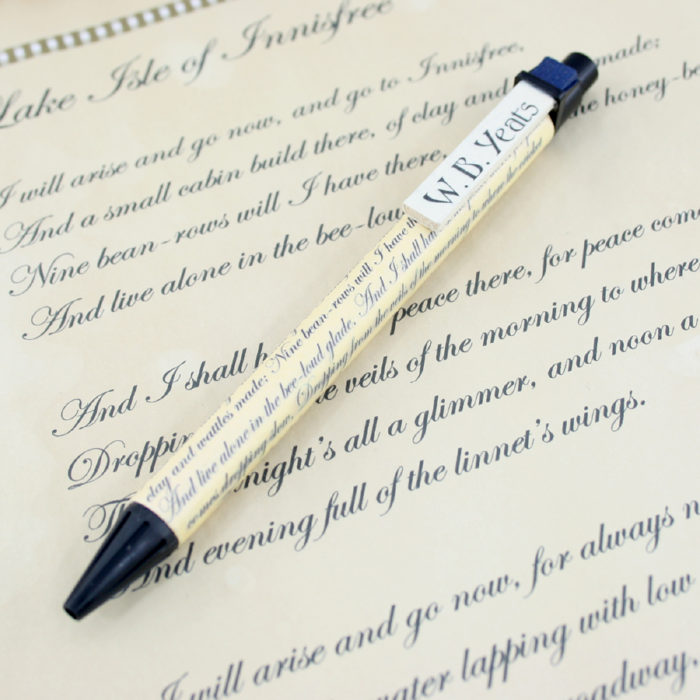 24 Aug Poetry, Lakes and an Isle or two

Posted at 16:50h in In studio by Vanessa Scott Hayward

A very quick post to let you all know that the Lake Isle of Innisfree pen has just gone live on the site.

The poetry pen can be personalised or you can purchase it just as it is. I have also added a little something extra tothis new design. As an experiment I am offering a vintage style scroll of the same poem that you can buy alongside your WB Yeats pen. I originally designed the scroll simply as a photo shoot prop but I liked it so much I thought other might too!

I think this pen will make a great gift for anyone who loves poetry, especially given the popularity and undying affection people have for Yeats and his poems.

As a special introduction offer you can get a 20% discount by using the coupon code ‘loveyeats’.

The Lake Isle of Innisfree

I will arise and go now, and go to Innisfree,
And a small cabin build there, of clay and wattles made:
Nine bean-rows will I have there, a hive for the honey-bee;
And live alone in the bee-loud glade.

And I shall have some peace there, for peace comes dropping
slow,
Dropping from the veils of the morning to where the cricket
sings;
There midnight’s all a glimmer, and noon a purple glow,
And evening full of the linnet’s wings.

I will arise and go now, for always night and day
I hear lake water lapping with low sounds by the shore;
While I stand on the roadway, or on the pavements grey,
I hear it in the deep heart’s core.

For those of you who don’t know much about the poem, it is based on an actual place in Ireland. The Isle of the title is a tiny little island on Lough Gill in Co. Sligo. Yeats spent his childhood in Sligo and you can see it and the West of Irelands life long influence on his poetry. His writings also drew strongly from Irish mythology and folklore.

One of Irelands most well known poets, Yeats was awarded the Nobel Prize for Literature in 1923. He died in 1939 in Menton, France.

As to where the Poet lies now, while for many years Yeats fans trecked to a grave in Sligo recent discoveries show that this might not be the poets bones. Read more here

Poetry, Lakes and an Isle or two over on the six0six design’s blog